DMC-G3 – mirrorless camera 3rd Generation
Panasonic has announced the DMC-G3 - the beginning of the third generation of its Micro Four Thirds system. In many respects it carefully blends the best bits of the likeable GF2 (size and touch-screen interface) and GH2 (electronic viewfinder and focus speed), and wraps them around an all-new 16MP sensor. The G3 is very compact and extensively touch-screen driven but, from our perspective, the biggest news is that it's the first mainstream Micro Four Thirds model to use a sensor other than the 12MP unit used in Panasonic's previous G and GF series cameras and all Olympus's PENs. 'So how does the new chip perform?' you might reasonably ask. Well, you can see for yourself by having a look at our standard camera comparison or our gallery of real-world shots taken at a range of ISO settings. We'll be investigating the camera in more depth in the coming weeks and will produce a full review as soon as we can. 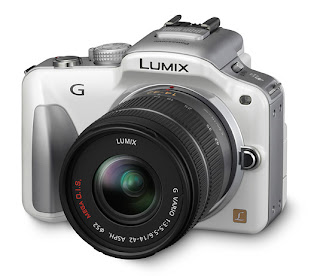 Email ThisBlogThis!Share to TwitterShare to FacebookShare to Pinterest
Labels: Gadjet